This morning, our little Presbyterian church (www.LakeBaldwinChurch.com) had the honor of hearing from an internationally known guest speaker, Gordon MacDonald.  Many of you will have no idea of who he is, but he is the author of Ordering Your Private World, which I read while in college, and many other books.  He was also at one time the national president of InterVarsity Christian Fellowship, the campus ministry I was a member of at UCF.   Some of his many other roles are seminary chancellor, Christian magazine editor, and pastor of over 40 years.

I didn’t know what the sermon would be about when I came, and even the church bulletin didn’t have a title for it.   I figured I would find out as I listened.  And, indeed, that’s what it was about: listening.  It is my habit to take very detailed notes of sermons, since that is about the only way my ADD mind can focus on listening.  I’d like to share a few thoughts from my notes since his message this morning was, as I expected, both a blessing and a challenge to me.  Besides, recapping  information in a blog post is another way to sink it deeper into the mind.

Why are people still so interested in the Titanic, one hundred years later?  Back in 1912, a sense of optimism pervaded society, with hopes of world peace, prosperity and prosperity.  The supposedly unsinkable Titanic represented security and success. When it sank, in many ways, that hope sank with it.  So did 1,500 passengers.  World War I came shortly after that, shattering any illusion of peace on earth.  What does this have to do with listening?  Apparently, there were three certain people on board who were not listening very well.  One, the owner of the Titanic, was extremely proud of his ship, and had ignored a telegram warning him of icebergs.  The second, the captain, was about to retire.  He had a lifetime of experience and confidence, but didn’t even send out a distress signal until 15 minutes after the Titanic struck the iceberg.  Third, the radio operator had been repeatedly warned by other ships about icebergs, but apparently told them to shut up because he was busy listening to a race on the radio.  This is what happens when people full of their own plans, distractions, and confidence refuse to listen and respond.

In Matthew 13, Jesus, halfway through his earthly ministry, boarded a boat (a wee bit smaller than the Titanic!) so he could speak to the crowd gathered on shore, with the water serving as a natural amplifier.  He spoke in parables, of which the story of the sower, the seed, and the soil is one of the most well known.  In those days, many kind of rabbis roamed around teaching.  Some were revolutionaries, who wanted to overthrow the Romans.   Jesus’ disciple Simon the Zealot may have originally been one of their followers.   Other rabbis were more philosophical and intellectual, such as the Sadducees. Still others preached a more formal, institutionalized method.

Jesus uniquely focused on the hearts of the people.  He was not impressed with appearances, wealth, or social connections.  He is the explorer of inner space, our hearts.  And what if that inner space is as large as outer space?  That’s an intriguing thought.   Our souls are much deeper than we think.

Beneath the cheerful surface many of us wear to church on Sunday mornings, our actual mood often doesn’t match.  Some don’t want to be there, some are heartbroken by crises and conflicts, some had a tough week and are fearful about the days ahead.  Yet Jesus knows what is going on.  He also knows if we are listening to him or not.  Let’s look at the parable of the seeds and the soil in Matthew 13 and think about how well we listen.

What about the four kinds of soil?

The soil on the path is so hard that the seeds which fall on it are snatched by the birds before they even have chance to take root.  This soil represents those who allow failure, bitterness, and apathy to make them cold toward what God has to say.  They just don’t want to hear it.

The rocky soil is so shallow that even though the seeds sprout quickly, there is no place for the roots to go.  The scorching sun and lack of moisture wither the plant.   Easy come, easy go.  This soil is like people who experience God’s message only at an emotional level.  They are enthused and revved, but the novelty fades when trouble comes along.  They aren’t willing to devote their lives.  They don’t count the cost of discipleship.  They are like the crowd in John 2 who wanted to make Jesus their king.  Jesus didn’t trust them because he knew what was in their hearts: hype and not commitment.

The thorny soil chokes out the seeds that take root there, just like people who get distracted by wealth and worldly amusements and end up with no time or energy left for God.  The rich young ruler refused give up his stuff to follow Jesus and missed out on the true treasure.  Yet nothing should compete with the claim that the gospel, the good news of salvation and redemption, lays on our lives.

Yes, there is finally some good soil: beautifully prepared, nurtured by nutrients and water, plowed up.  This soil represents the person who knows how to listen to God, who takes the time to pay attention.  Growth doesn’t just happen.  It is cultivated intentionally.

Rev. MacDonald noted that he used to think of this parable as only referring to what happens when a person initially hears and responds (or not) to the gospel.  Yet he reminded us that we can be like any of these soils on any given day of our lives.  There are times when, even after being Christian believers for decades (as I have) that we wander into apathy, distraction, temptation, bitterness or confusion  -- and we just stop paying attention.  We don’t go deep.  It is a good practice to evaluate our own hearts each day, asking, “Which of these soils represents my heart right now?  What condition am I in?  How well am I listening?”  We can pray along with the Psalmist, “Search me, O God, and know my heart; test me and know my anxious thoughts. See if there is any offensive way in me, and lead me in the way everlasting”  (Psalm 139:23-24).

I could try to write more of my own thoughts, but instead I’ll leave you with links to two of my poems about seeds, one about quieting our hearts to listen, one about God's grace leading us home even through the trials of life, and one about sticking with God's word over the long haul.
You may also be interested in a few of the articles that Rev. MacDonald has written for the Leadership Journal, where he as been editor-at-large.

This weekend I am grateful for the opportunity to listen and learn.  I know I need to take some extended time soon just to be still and hear from God.  How about you?

Posted by Virginia Knowles at 3:12 PM No comments: Links to this post

Not-So-Extreme Makeover: The Front of Our House

Last week I posted Easy Spring Decorating on a Dime on this blog, and promised to do one on thrifty decorating outside the front door and along the walkway.  Here it is!


I hope you enjoyed my little decorative tour of the front of our home!  What have you done at your house?


To recap, my best hints for making the front of your home look nice:

Project 52!  The photo theme this week is Things that Grow.

Posted by Virginia Knowles at 4:09 PM 6 comments: Links to this post

Easy Spring Decorating on a Dime 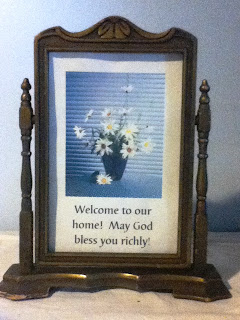 Welcome to my home!  It's springtime now (and has been for a few weeks) so I thought I'd do a post on decorating.  I did one a couple of years ago about Easy Autumn Decorating on a Dime that was quite popular, so here's to another season of pretty penny pinching!  I've picked out many of our spring decorations to show you.  Yes, we have a lot more, but no, we haven't spent much at all on it.  Some of our heirlooms came to us via my parents and grandparents, some were brought home from other countries by my daughters or myself, some were gifts from others, some were picked up at yard sales, one was salvaged from someone else's trash pile, and a few were even homemade.

Oh, before we begin, a little disclaimer.  I am not a professional decorator.  I'm just trying to make my home look attractive for my family.  To be truthful, I was decorating and photographing around messes, a fact of life when 10 people live in one house. :-)  Decorating for the seasons not only reflects the time of year, but also helps break up the boredom of seeing the same things all the time.  Of course, there are certain "anchor" pieces that are on display all year, too.

Ready?   Let's start with the front hallway, since that's the first place guests to our home see.

Moving on to the kitchen...

And now to the dining room!


Next up, the master bathroom...


So there you have it!  I mini-tour of spring in most of the rooms of our house.  (I have spared you the kids' bedrooms.  Trust me on that.)


Pretty soon, I'll do a post about sprucing up your front doorway area on the outside.  I'm fixing to do a mailbox makeover and more!


Meanwhile, think about these concepts as you are decorating for spring:
Virginia Knowles


P.S. Update on 4/19: My post on decorating outside, including my mail box project, is here: Not-So-Extreme Makeover: The Front of Our House

Posted by Virginia Knowles at 8:34 PM No comments: Links to this post