75 Years and Counting: Celebrating the Marriage of Henry and Dorothy Hess 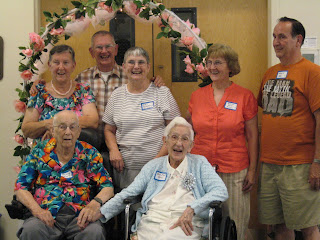 Last week my maternal grandparents, Henry and Dorothy Hess, celebrated their 75th wedding anniversary! Every time I mention that to someone, jaws drop. Seventy-five years? That’s nearly unheard of these days! I was very fortunate to be able to spend six days visiting with them at my parents’ house in Columbia, Maryland. We had a big party for them on June 20, with over 50 relatives and old friends attending. This picture is of them with their five children. They also have 13 grandchildren, 26 great-grandchildren and two great-great-grandchildren. 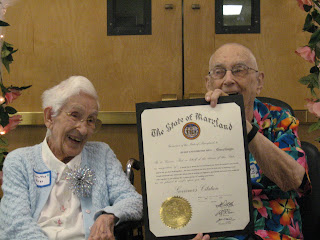 My brother John read a congratulatory proclamation from the governor of Maryland. They deserve it! My grandparents have had such a long and full life! They have always been adventurous, traveling the world and then showing us slides of such far-flung locales as New Zealand. When I was a child, they drove out from Pennsylvania to California to see us, and then continued on their trip to Alaska in their VW bus nicknamed the Orange Crate. In 1976, our family took a bicentennial trip in the reverse direction to attend the Hess family reunion, which was quite significant to me spiritually. You can read about that here: My Story of Liberty in 1976. 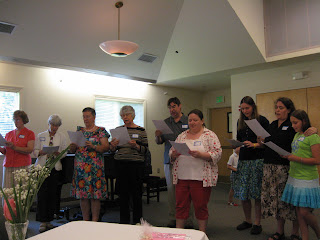 We also had a talent and tribute show. An impromptu choir sang, “I Only Have Eyes for You” and another song, my brother John played “Deep Purple” on the piano and accompanied his wife Dana when she sang, “Someone to Watch Over Me.” Various others sang or played the guitar. Another highlight was my Aunt Nancy speaking at length about several things she most appreciated about her parents, such as encouraging education, teaching responsibility, allowing pets, creating traditions, having fun, and demonstrating kindness and harmony. Of course she mentioned their creativity and frugality a few times along the way! 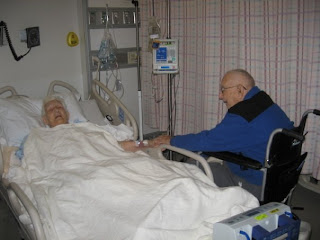 One of the most poignant features of the talent and tribute show was when my mom’s cousin Priscilla Douglas read a letter that my grandmother had written to Priscilla’s mother about marriage way back in the 1930's. In it, Grandma shared how confident she felt that her new husband Henry would love her faithfully even if she got old and sick. And he certainly has! (Last year she broke both of her hips, a few months apart. He quipped that it was a good thing she didn’t have three hips, because she would have broken another one! I took this picture of them last November when I visited Grandma in the hospital.) After Priscilla read the letter aloud, one of my cousins joked, “Was it written on the back of a placemat?” Grandma has been famous for that! And she has always ended her letters, “Remember that I love you.” We did. We do. We are very blessed with their legacy of affection and respect. 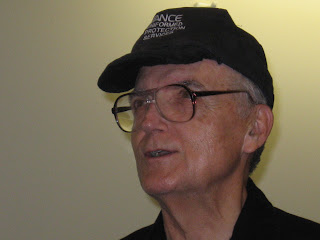 My father also gave his own touching tribute to my grandparents, telling of how much he appreciated them accepting him into the family over 50 years ago. Dad's hobbies are history and ethnology, and he constantly amazes me with his knowledge of my mom's family heritage. He and my mom met because my mom's cousin Charlie was my dad's roommate in college.

You may have already seen the poem I wrote to read to at the annivesary party. If not, you can read it here! I also read my poem "This Is My Song and I Sing."

"Diamonds in Our Family Tree" 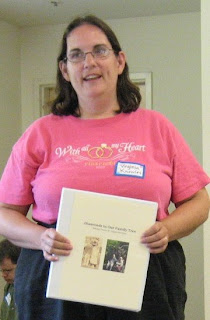 Pink roses on the arbor
Arched over groom and bride
Now seventy-five years later
They’re still smiling side by side.
With love enough for a lifetime
And four generations since then
Stories and laughter are flowing
As we all “remember when…”
So Happy Diamond Anniversary
To Henry and Dorothy Hess
We’re so glad to be your family
Knowing we’re forever blessed.
You are diamonds on our paths
Dazzling in our family tree
What a heritage to treasure
What a loving legacy!


My original blog post, Diamonds in Our Family Tree, includes some other comments and pictures. 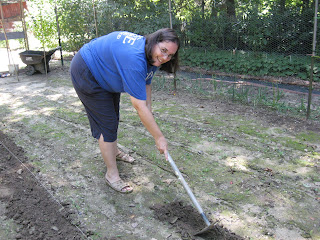 My grandfather has always been an avid vegetable gardener. I can remember the huge garden he kept at Squirrel Hill, their homestead near Dallas, Pennsylvania. Even now, though he can't get out and do the work himself, he still has a garden in my mom's backyard that he plans and supervises. Mom wasn't able to do much of the planting this year because of a bad back, so I offered to work a little down there the morning of the day I flew home. Unfortunately, she had to take Grandpa to the doctor, so neither of them was able to give me any but the most 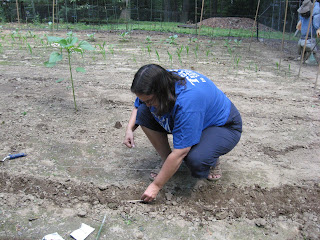 rudimentary of instructions. I'm sure they are going to regret the day they let a rookie black thumb gardener (me) try to plant corn. My nephew Doug and sister-in-law Dana helped out, too, and they don't know any more than I do, so I guess I won't be the only guilty party if the plants don't survive! I was trying to recall what I had learned about planting corn from Laura Ingalls Wilder's book Farmer Boy when I read it aloud to my kids a while back. I hope it helped! I'll post separately about my attempts to make turkey scrapple from scratch, another one of Grandpa's legacies to me.

Those of you who are interested in preserving family memories might also like to see my Hess Family Heritage page which contains memoires of my German great-great-grandfather Henry (Heinrich) Hess and my grandmother Dorothy Hess, as well as vintage photos, letters, a page from a family tree, and other goodies. You can also view some of the photos from my trip to Maryland at: Over the River and Through the Woods, To Grandmother's House I Go and Hess 75th Wedding Anniversary and Reunion. I also have Vintage Photos of My Ancestors.

I encourage all of you to reconnect with your relatives this summer, even if it is by phone or e-mail. Learn a little about your family history, and think of ways you can leave a legacy for your own children, grandchildren and great-grandchildren!

(Adding this in on July 8: My second cousin Ruth Moytica Parks in Iowa uploaded some video of my grandfather, Henry Hess, describing vintage family photographs in January 1996.
http://www.youtube.com/watch?v=W4UsEPj8piQ -- part 1, about 8 minutes
http://www.youtube.com/watch?v=NYzkYFS1W2E -- part 2, about 4 minutes
Some of the pictures featured in Grandpa's video are also in the vintage photos album linked above.)


Posted by Virginia Knowles at 4:35 PM